[News Report] A Tragic Death of a Labourer with Intellectual Disability

A Tragic Death of a Labourer with Intellectual Disability

-Korean DCSOs, “This is a Social Murder”

Father of Kim Jae-soon is making memorial altar for his son. Photo by Lee Gayeon.

On May 22, Kim Jae-soon, a 26-year-old labourer with intellectual disability died after being sucked into a industrial shredder while working alone at a waste disposal facility in Gwangju city without safety devices. Disability civil society organisations insisted that Mr. Kim’s death is a case of ‘Social murder’, and urged the government to reform its job policy and related laws for the disabled people.

According to the interim report released on June 6 by the ‘Fact-Finding Team on the Death of Kim Jae-Soon(below fact-finding team)’, the deceased had been working at the Chosunwood factory in Gwangju since early morning on May 22 to clean up the crushing workplace. Later around 9:45 a.m., he went up to an industrial resin shredder to test the machine and fell into it while trying to remove stuck waste and died of multiple crushing injuries.

The work of cleaning the shredder is a high-risk labour that had to be carried out in groups at least two, but he had to work alone. According to the fact-finding team, the workplace did not manage nor follow the safety rules. The fact-finding team said that “if there was at least one person paired with Mr. Kim, the person could have stopped the machine right after he fell into the shredder”.

The fact-finding team also pointed out that safety equipments were not prepared properly by the law. It was found that the shredder did not have a cover for the inlet and a work footing which prevents falls. In addition, there was no emergency stop remote control or work conductor who shut down the machine. 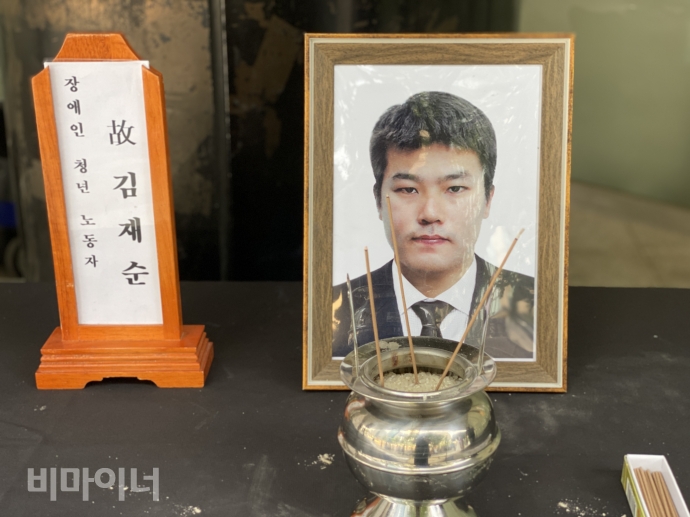 Photo of Kim Jae-soon is put on the memorial altar. Photo by Lee Gayeon.

He once quitted the job, but returned to the shredder as not employed for his disability

Kim Jae-soon had worked at the same company from February 9, 2018 to April 30, 2019.  Though Mr. Kim was sincere to his job as he never absent to the work, he quit the job because of hard work. However, he had to come back to the company in August 2019 and work at the most dangerous workplace again for he could not find other job as a person with intellectual disability.

After the accident, the owner of the company told to Kim’s family that he was never given the job of the shredder operation, nonetheless, it turned out that it was his daily work. The fact-finding team pointed out that “the company, Chosunwood, condoned and/or instructed the sole labour of a person with intellectual disability in high-risk workplace”.

The fact-finding team asked the Gwangju Regional Employment and Labor Administration to jointly investigate the accident and also requested a full investigation of the same local businesses to prevent such accidents.

Solidarity against Disability Discrimination(SADD), one of the Korean disability civil society organisations, held a press conference in front of Seoul Regional Ministry of Employment and Labor to criticise the failure of the 30-year-long job policy for the disabled people. The father of Mr. requested anonymity , also participated to the event.

The father said that he also is a physically disabled person. On 2002, his left hand was crushed by a grinder in workplace. “When I mentioned in my CV that I have an impairment, companies were reluctant to hire me, while I could get a job when hid it”, the father of the deceased said, “Why should I conceal the fact? Any person with or without disabilities should be able to work together equally”. He also emphasized the necessity of ‘Act on the Punishment of Corporate for Serious Accidents’.“At every construction site of Korea, labourers chants ‘protect my safety by myself’ before starting their daily work, which is total nonsense” he said, “The safety of every labourer should be protected by the government and business owner”.

Moon Ae-rin, the co-representative of Seoul SADD, expressed her anger. “Last December, we already lost one of our colleagues Seol Yo-han, a disability peer counselor who committed suicide due to the huge pressure from performance evaluation by the government. Now we lost another colleague in mere 5 months”, she said. “After 30 years of the policy to promote the employment of the disabled people, the working environment of them is still inadequate”, the activist raised her voice, “we will not step back until the minister of Employment and Labour apologise for the death of the deceased and promise to protect the right to safe work of the disabled people”. 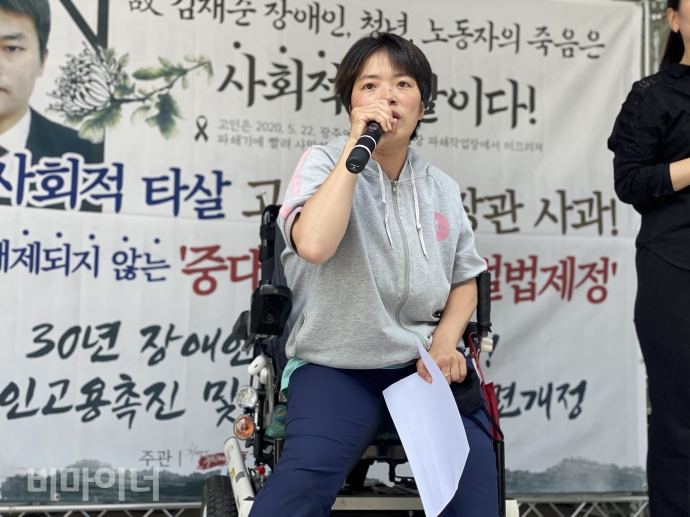 Repeated Death of labourer with disabilities

Kwon Myeong-sook, Executive Commissioner of the People’s Solidarity for Social Progress, emphasised that the government has the responsibility of providing safe and decent jobs for various groups in the society. “Everytime I hear a death of a labourer with disability, sorrow and anger wave toward me”, commissioner Kwon stated, “Korean government should stop applauding itself for creating few jobs for the disabled people and investigate the working environment of them”.

“Today, we declare death to the disability employment policy of Korea”, Park Kyung-seok, Chairperson of the board of the  National Council of Popular School for People with Disability raised his voice. “We have to enact the ‘Act on the Punishment of Corporate for Serious Accidents’ and revise the current ‘Act on the Employment Promotion of Persons with Disabilities’, so that no one would be left behind, not only the disabled workers but also non-disabled ones, in safe workplace”, he said.

Accordingly, SADD demanded △apology from the EL minister on the death of Mr. Kim △legislation of the ‘Act on the Punishment of Corporate for Serious Accidents’ △revision of the ‘Act on the Employment Promotion of Persons with Disabilities’ △overall safety and reasonable accommodation investigation on the workplaces where the disabled labourers are working △increased budget for the work assistants for the disabled workers △abolition of the Minimum Wage Act article 7, which excludes persons with severe disabilities from minimum wage △10,000 public jobs based on the right to work for the disabled people. 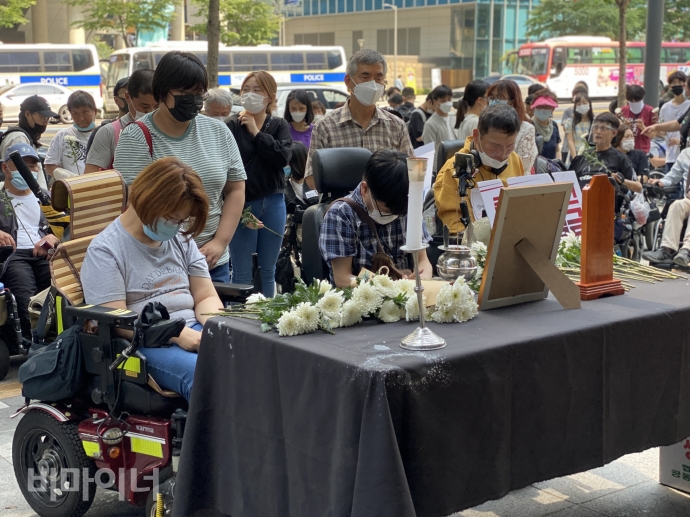 Participants are having silent tribute for the deceased. Photo by Lee Gayeon.